Big name marketers are testing just about any type of interaction on Twitter in order to stand out. While some marketers are bulking up their tweets with buttons to drive sales, brands like Heineken and Evian enlist Twitter in conjunction with traditional tactics such as on-the-street or video marketing. 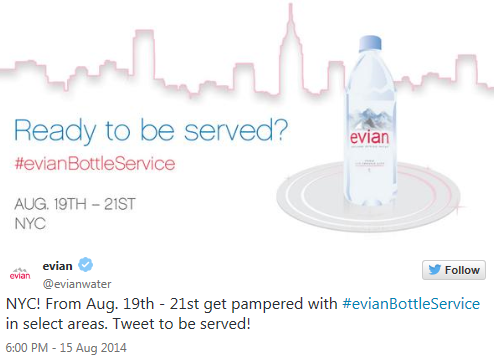 In summer 2014 Evian began its Twitter push in New York from August 19 to 21 under the hashtag #Evianbottleservice, targeting consumers in city parks like Bryant Park and Madison Square Park at hot times of day. To participate, consumers had to use the hashtag to tweet a message to Evian describing their current location. A team of Evian then responded to the tweets, triggering a team of brand ambassadors on the streets to deliver a bottle of water within seven minutes to each participant.

Before the campaign was launched, Evian teased it via Social Media starting the 15th of August. During the time period of August 15 to August 21, Evian earned around 147 new Twitter followers per day. This number represents an 11x increase from the same time period in July.

It is also to mention that there were 3.5 times more daily mentions of the brand during this period compared to competitors. (Source: Link)

We found an interesting statistic about the increase of Evian on Social Media platforms. If you are interested in finding out more about Evian click here.

This example of Evian is very nice in showing the effect of a good combination of using social media and real-time marketing. On one hand, the social media ensures to reach a great number of potential customers and to inform them about the project. On the other hand, the real-time marketing enables the customer acquisition on a more personal level.

As you have seen in the video people getting a bottle of water were very grateful and happy. What is better in producing good word-of-mouth than happy and satisfied customers?

Visit our blog soon again to learn more about digital marketing, and remember:
If we can do it you will do just fine. Let's conquer the digital world together.
Eingestellt von Unknown um 08:27